Welcome to our site! We are here to help you create your own flourishing foodforest - no matter how big or small your space.

Here you'll find detailed articles with tips and tricks for beginners through to green thumbs, organic heirloom seeds tested in the toughest conditions and our favourite products to help you grow, eat and live sustainably.

I’ll let you in on a little secret. I have been known to sneak in a bowl of cereal while I’m sitting infront of the TV at night. Breakfast is my favourite time of the day, which that means anything with oats ranks pretty highly on my list of favourite foods. And while a steaming bowl of oat porridge is creamy and comforting, it’s hard to find the time to prepare one before the day is already in full swing.

And that’s exactly why I love to have a big jar of home-made muesli on hand. For those days when you forgot to set the alarm; for when you want to feel like it’s Sunday but it isn’t; or maybe, for a late-night snack. We call it Muesli in Australia while overseas this tends to be called Granola. Rest assured it’s the same delicious bowl of goodness.

Okay, so I don’t endorse late-night snacking. But if you’re going to do it, at least make it healthy.

Why make your own?

While there are a large range of mueslis to choose from in the supermarket, even the most expensive and gourmet brands pack their ranges full of hidden sugar and oil. This makes them less an everyday kind of breakfast or after dinner dessert, but more an occasional. And some brands are filled with way too much dried fruit, or the not right kind which leads us to picking it all, out and kind of defeats the purpose.

But there’s an great delicious and healthy alternative, and it’s not on the shelf — it’s in your own cupboard. Home-made muesli is not only healthier and more tasty than anything available at the supermarket, but it’s also a little bit addictive to make. The ingredients that go into muesli are cheap, widely available, and can be wholly tailored to suit your tastes. Actually, choosing your mix-ins is half the fun. We have a pantry crammed full of ingredients such that our pantry rather resembles a bulk goods store, including pepitas, amaranth, buckwheat, dried dates, fruit we dried ourselves, brazil nuts, cashews and many other cereal ingredients to prove it.

You can sit back and watch this lazy Sunday afternoon process in all its video glory, or read on for written instructions.

My usual process starts with putting a few cups of oats into a heavy-bottomed pan (if I haven’t convinced you to invest in a dutch oven yet, then I will. They last a life time and it’s essential for baking bread. We use ours everyday for other culinary creations including this muesli). The right pan allows you to effortlessly achieve the sensation of a toasted crunchy muesli without needing to add a drop of oil – seasoned cast-iron is naturally non-stick without needing your food to ever touch that nasty stuff Teflon. To that, I add a handful of whatever roughly-chopped nuts, seeds and dried fruit takes our fancy, and sprinkle it all with a generous teaspoon of cinnamon. I then stir the mixture regularly over medium-high heat until the amazing smell of pancakes, apple pies and lazy Sundays starts to waft through the kitchen and the oats that have been deprived of light in my cupboard start to bronze over the strong heat.

So far so delicious. You’d think all of that would be enough, but recently I’ve felt like there’s something missing from my muesli that’s often in the commercial stuff. The nuts and seeds give it an amazing crunch, the fruit gives you the odd sweet kiss after a mouthful of wholesome grains, and the cinnamon adds that secret rich undertone.

But what about those pillows of white that float on the surface? Those feather-light nuggets of delight? Those chewy clouds of puff?

And so, in trying to answer that question, I went down a bit of a google-rabbit-hole. A pilgrimage whose road was paved with grains. Popcorn seemed like the easy answer, but add it to your bowl and honestly?— it feels like you’re just eating popcorn with some other flavours tossed through it. And while we all love popcorn at the movies, I need something more substantial in the morning.

Down that rabbit-hole further and I found some more options. You can buy puffed grains like rice (rice bubbles, anyone?), wheat, and barley. I will say this: if you’d rather save time, I won’t hold it against you if you buy a bag of puffed something-or-other, but you’ll be missing out on a lot of fun.

All of my googling and testing did turn something up. Did you know that you can puff more than just corn? Buckwheat can be puffed too; but puffing buckwheat requires a lengthy process of boiling and drying before frying it in oil or in the oven. And the result, while deliciously nutty is not as light as you’d imagine. Quinoa is another great option. But, at the end of the day, I settled on amaranth. It’s super easy to puff — you can do it on your pan and you don’t need to presoak it or use any oil. It puffs up just like popcorn. In fact, I find it more foolproof than popcorn.

When the near-microscopic amaranth seeds are made into a porridge, they have a pleasant creaminess and a flavour that’s strangely reminiscent of stewed greens. But don’t worry if that sounds confronting — when the seeds are puffed they are relatively flavourless; all you’re left with is a foamy ball roughly the size of a poppy seed. The perfect addition to a bowl of muesli.

Toss some puffed amaranth in when the toasting of your muesli is nearing its end and you’ll find they act like a light dusting of snow amongst the colours of autumn already in your pan. When you’re done, pour the muesli into an airtight jar, pour some vanilla essence over them while they’re still warm and seal the lid. Wait until they’ve cooled (if you can wait) before digging in.

So, here’s to every day that isn’t Sunday. Now we have a breakfast that’s quick-and-easy to prepare, delicious, and healthy. Just add your favourite milk. Or, if you’re feeling lively, some sliced bananas, berries or stewed fruit. 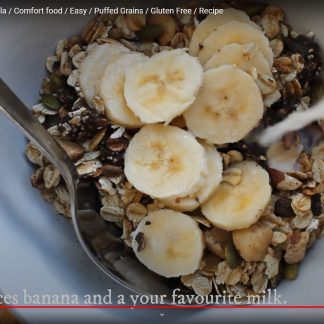 Sign up to our Newsletter for exclusive tips, grow guides and be the first to hear about events and new products.